Gilbert Brown (born February 22, 1971) is a former nose tackle who played for the Green Bay Packers from 1993 to 1999 and from 2001 to 2003. Gilbert player 125 Packers games (103 starts) recording 292 tackles (186 solo) and seven sacks. Nicknamed “The Gravedigger,” in honor of his celebratory dance following a thunderous tackle, Brown played in 15 Packers playoff games. He was a major contributor on strong defenses during the mid-1990s. His best season was 1996, when Green Bay won Super Bowl XXXI. He was also part of the Kansas team that won the 1992 Aloha Bowl, and was selected for the All-Academic Big Eight team in 1991.
EARLY YEARS
Gilbert grew up in Detroit, Michigan and back in high school, he never looked at big-time football factories such as Michigan. He wanted to get away from what he saw in Detroit. He wanted a quiet, smaller environment in which to live. So he turned down Bo Schembechler and the University of Michigan to go to a school known for its powerful basketball program, and not for its football ability: the University of Kansas. The Kansas Jayhawks coach Glen Mason said, “The very first play of the first drill, he went up against a lineman and he absolutely demolished him. We just looked around at each other.”
With the Jayhawks, Brown helped build a winning program along with, fellow defensive lineman and future NFL first round pick, Dana Stubblefield. Gilbert started all but two games in four season at the University of Kansas (1989-1992), and was tied for sixth in school history in tackles by a defensive lineman with 168, fifth in career tackles for loss with 30, and had 7.5 career sacks. He finished second on the team in sacks, tackles for loss and fumbles recovered in 1991 while helping the Jayhawks hold opponents to an average of 150.9 yards per game on the ground, which was the best run defense at Kansas since 1968 at the time. A year earlier, as a sophomore, Gilbert was names as the Jayhawks’ ‘Co-Defensive MVP’ and earned second team All-Big Eight Conference recognition. Brown started nine games at nose guard as a freshman and was an All-Academic Big Eight selection in 1991.

Still, Brown made a name for himself in football. He was poked in the eye one too many times his freshman year, so he started wearing the tinted visor that he wore throughout his professional career. And he came up with the now famous “Gravedigger” move at Kansas, after a big defensive hit, he would dig an imaginary grave, which became his trademark and his nickname. 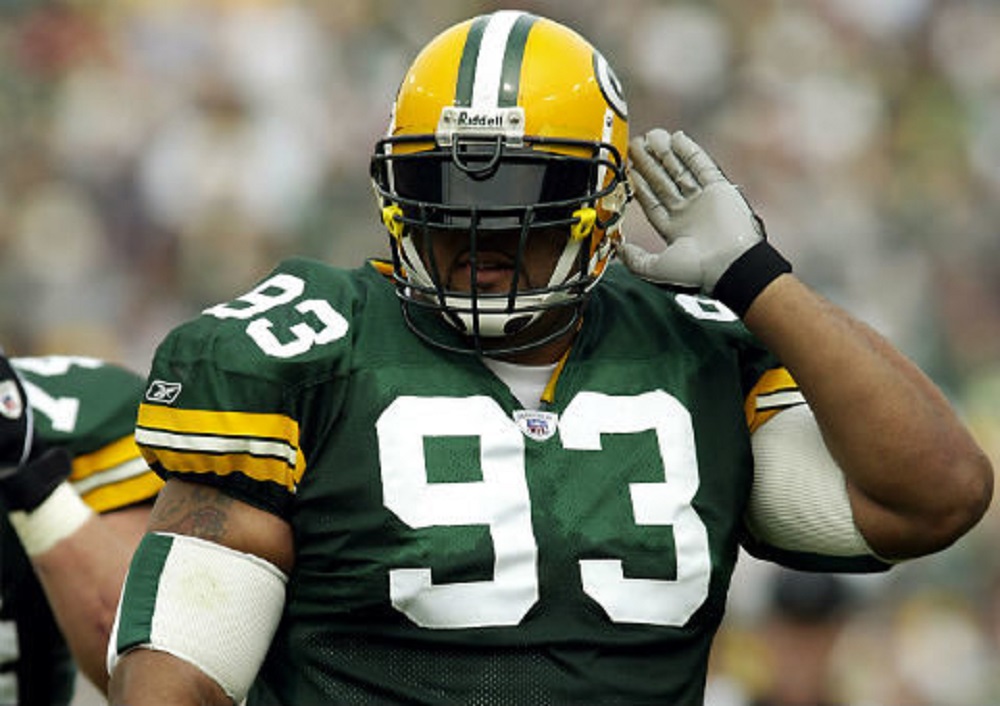 PROFESSIONAL CAREER
Gilbert was drafted by the Minnesota Vikings in the third round of the 1993 NFL Draft (79th overall pick), but was waived during the final roster cut downs on August 30, 1993 in his first training camp. At the time, the Green Bay Packers were desperate for defensive lineman and picked him up on August 31st. Brown played in just two games that season while he worked off some of his weight in practice. In 1994, he played but his season was cut short with a torn anterior cruciate ligament. Again in 1995, he played, but an elbow injury cut that season short. In 1996, he started all 16 games next to Santana Dotson, Sean Jones and Reggie White, a defensive unit that allowed a league record low of only 19 touchdowns. Brown had a career high of 51 tackles and his first complete 16 game season.
Brown became a fan favorite, partly because he was easy to spot, and partly because of his eccentric “Gravedigger” celebration. During the 1996 season, it became known that Brown would regularly order the “Gilbert Burger” – a triple whopper with extra everything, cut in half with extra cheese, no pickles – always obtained from the Oneida Street Burger King in Green Bay. Burger King even made it available for a short time as a promotion in Wisconsin Burger King restaurants.
Brown was a highly sought after free agent after the 1996 season, but he elected to take a pay cut to stay with the Packers. On February 18, 1997, he signed a three-year, $8.25 million contract, which was 10 times his 1996 salary, but was about $1 million less than the other offer he received from Jacksonville. He said that he would rather stay with the team and fans that he knew and loved.
After playing all 16 games during the 1998 and 1999 seasons, he spent the 2000 season out of football after his contract with the Packers was not renewed. Before the 2001 training camp, he worked out and lived for a time with Fred Roll, his former strength and conditioning coach at the University of Kansas, and subsequently returned to Green Bay for training camp in July at a perceptibly more svelte 339 pounds – and once again equipped with his former quickness. He was re-signed by the Packers on March 23, 2001, after which Brown announced, “If I didn’t think I could do this anymore, I wouldn’t be here.”
Brown has two good years after his return to football. However, he ruptured a bicep during the 2003 pre-season, but played on without having surgery. He recorded 14 tackles, one fumble recovery (the first of his career) and one pass defense. In a victory over Chicago (Dec. 7), Brown posted a season-high four stops, along with a pass breakup.
On March 2, 2004, the Packers released Brown. He had played 125 Packers games (103 starts) with 292 tackles (186 solo) and seven sacks. He also played in 15 Packers playoff games. As of 2013, Gilbert had the 2nd most following Brett Favre (22).

Gilbert, with the strong influence of his mother and family, felt that he wanted to give something back to the community, so he started focusing on his foundation which now benefits over 156 children’s charities throughout Wisconsin.
On December 11, 2007, the Green Bay Packers Hall of Fame announced that Gilbert, along with Al Treml and Frank Winters, would be inducted into the Hall at the 38th Annual Hall of Fame Induction Banquet, which was held on July 19, 2008, in the Atrium of Lambeau Field in Green Bay.